Inflation data showed prices easing in the US and Europe while Japanese CPI hit a level not seen since the 1980s.  The downtrend in US producer prices, coupled with weaker-than-expected US retail sales and a massive decline in the Empire State Manufacturing reading, fostered the notion that the Federal Reserve is nearing an end to tightening monetary policy. Continued corporate layoff announcements also suggested that employment data should begin to cool; however, this week’s Initial Claims data showed nothing of the sort.  Federal Reserve officials’ rhetoric continued to toe the line suggesting that the Fed is not finished and that rates will be higher for longer.

It is widely expected that the Fed will raise its policy rate by 25 basis points on the first day of February, while another 25 basis point hike at the March 23rd meeting is currently assigned a 79.1% probability.  If this scenario plays out, the Fed’s policy rate will end March at 4.75% to 5%, which some suggest is where the Fed will pause and wait for more data before increasing rates further. 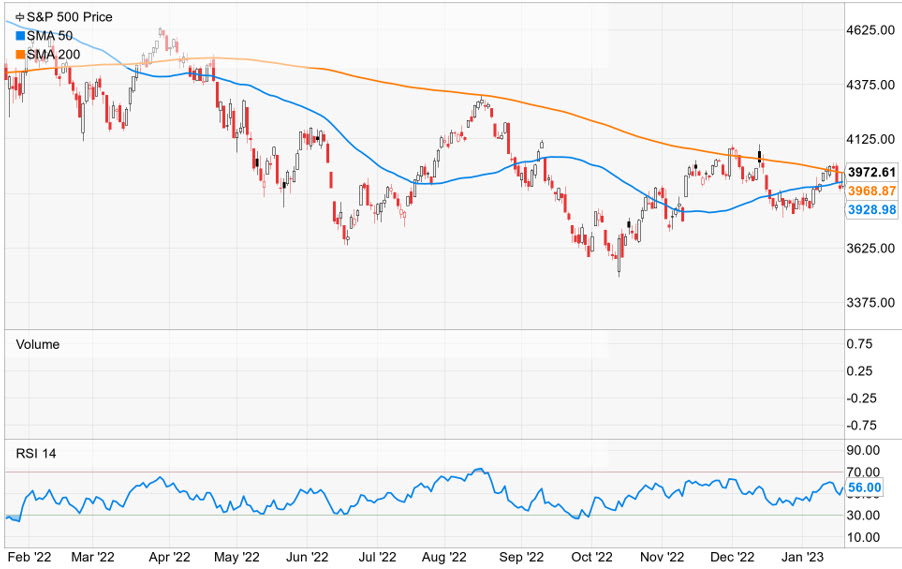 4th quarter earnings were mixed over the week and highlighted by a substantial miss from Goldman Sachs, a solid quarter from Morgan Stanley, and a better-than-expected increase in paid subscribers at Netflix that propelled its stock higher. 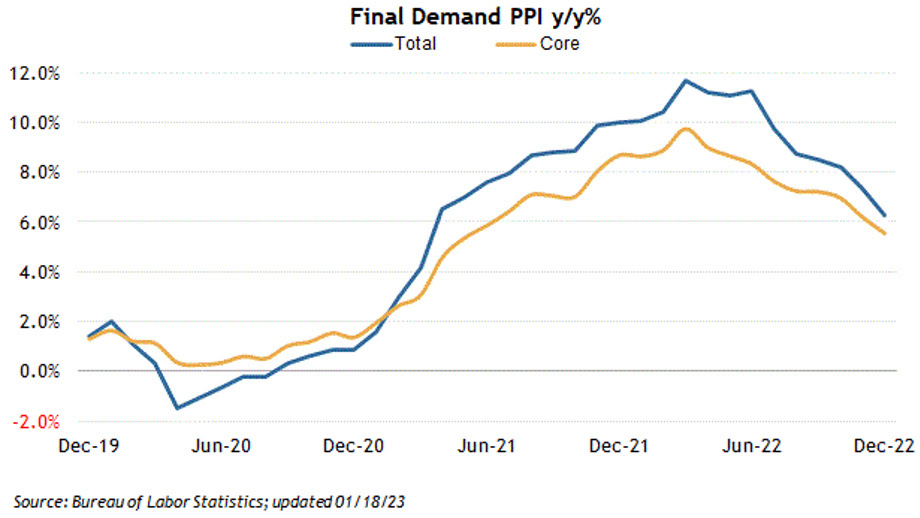 The US Dollar continued to weaken but had a strong week against the Japanese Yen as Japan’s central bank announced no changes to its ultra-accommodative policy.  Oil prices increased by $1.88 or 2.3%, with WTI closing at $81.67 a barrel.

Economic news showed Producer Prices moderating.  Headline PPI fell 0.5% versus expectations of a 0.1% decline.  On a year-over-year basis, PPI fell to 6.2% in December from 7.3% in November.  The Core reading also declined year over year to 5.5% from 6.2%.  US Retail sales fell 1.1% versus the consensus estimate of -.8%. The Empire State Manufacturing survey showed a decline of 32.9% versus an expected decline of 11%- this was the steepest decline for this data series since its inception.   On the labor front, Initial Claims were 190k versus the 212k expected, and Continuing Claims increased to 1647k from 1630k.

Investment advisory services offered through Foundations Investment Advisors, LLC (“FIA”), an SEC registered investment adviser. FIA’s Darren Leavitt authors this commentary which may include information and statistical data obtained from and/or prepared by third party sources that FIA deems reliable but in no way does FIA guarantee the accuracy or completeness.  All such third party information and statistical data contained herein is subject to change without notice.  Nothing herein constitutes legal, tax or investment advice or any recommendation that any security, portfolio of securities, or investment strategy is suitable for any specific person.  Personal investment advice can only be rendered after the engagement of FIA for services, execution of required documentation, including receipt of required disclosures.  All investments involve risk and past performance is no guarantee of future results. For registration information on FIA, please go to https://adviserinfo.sec.gov/ and search by our firm name or by our CRD #175083. Advisory services are only offered to clients or prospective clients where FIA and its representatives are properly licensed or exempted.

For more information about any of our products and services, schedule a meeting today.